Each year Jacob’s Ladder gives an award to an outstanding scientist in the field of genetics research.  In memory and honour of Jacob’s beloved doctor this award was re-named The Jacob’s Ladder Norman Saunders International Research Prize.  Through this initiative noted recipients from around the world have come to Toronto to share their research.  This year’s honouree will be speaking to grand rounds at the Hospital for Sick Children in December. 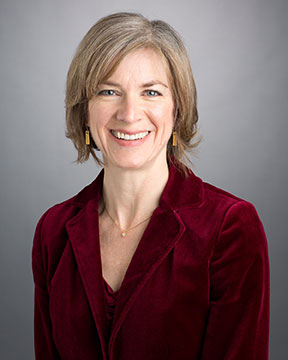 Jennifer Doudna, Ph.D is a professor of molecular and cell biology and chemistry at the University of California, Berkeley, where she holds the Li Ka Shing Chancellor’s Chair in Biomedical and Health Sciences and is a Howard Hughes Medical Institute investigator.

Professor Doudna’s research seeks to understand how RNA (Ribonucleic acid) molecules control the expression of genetic information. Her research led to insights about CRISPR-Cas9-mediated bacterial immunity that enabled her lab and that of collaborator Emmanuelle Charpentier to re-design this system for efficient genome engineering in animals and plants, creating a transformative technology that is revolutionizing the fields of genetics, molecular biology and medicine.

Professor Doudna studied at Pomona College and Harvard University, was a post-doc at University of Colorado, Boulder and faculty member at Yale University, before joining the faculty at the University of California, Berkeley. She is a recipient of numerous awards including the NSF Waterman Award, the FNIH Lurie Prize, the Paul Janssen Award for Biomedical Research, the Breakthrough Prize in Life Sciences, the Gruber Prize in Genetics, the Massry Prize, the Heineken Award, the Gairdner Award, the Princess of Asturias Award, the Nakasone Award, and the L’Oreal-UNESCO International Prize for Women in Science. She is an elected member of the National Academy of Sciences, the National Academy of Medicine, and the National Academy of Inventors, and a Foreign Member of the Royal Society.  She was named one of Time Magazine’s 100 most influential people in the world in 2015.